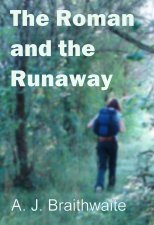 When I finished The Roman and the Runaway in September 2009 I was not sure of the best way to get my book out to its potential public. I was new to the whole business of publishing and all I really knew was that it is horrendously difficult to get ‘properly published’. Just the idea of having to write to hundreds of agents or publishers in order to receive as many polite rejection letters seemed hugely daunting (not to mention time-consuming and utterly pointless).

I read Chris Anderson’s book, Free, online at around the same time as I finished the novel. I had read only one other book in digital format before (Neil Gaiman’s American Gods, if you really want to know (also available for free at the time!)). The combination of online reading and the subject matter of Anderson’s book resulted in a lightbulb-style moment of enlightenment. It suddenly became obvious that what I needed to do was to publish the novel online somehow.

I think I’d originally been looking at publishing electronically (and charging for the book) through Amazon, only to find at the last minute that I needed to be living in the US in order to do so. After that, the first site I chose to put the book on (for free) was Scribd, where the book got a few downloads and reads. 14 and 388 respectively, at the time of writing this. Hardly spectacular. The main problem with Scribd is its categorisation of works. No-one seems to take them seriously, so there are huge numbers of things in the ‘novels’ category which are not novels at all and there aren’t any subdivisions to the category which would help people find different types of novels. It seems that anyone can upload anything, anywhere: there’s no checking involved.

A month later, I somehow found out about Smashwords. Initially I put the book on there as ‘Reader sets the price’. After a fairly short period of time I changed the price to ‘free’. The logic behind this was that I wouldn’t want to pay for an ebook from an unknown author myself, so how could I expect others to pay for my work? I actually have yet to pay for an ebook from a known author. That might change if I get a dedicated ereading device at some point, but right now I don’t see an ebook as having the same intrinsic value as an ink-and-paper one.

If I really like a free ebook, then I will pay for a paper version. This happened with Megan Whalen Turner’s book The Thief, which I originally found as a free ebook on HarperCollins’ site. I read it, enjoyed it and decided that my daughter would love it too. So I bought it in paperback. Not just that one, but the three sequels, too!

Ebooks are just too ephemeral for me to want to pay anything for them. So I’m happy to share my first one for free. If I ever get the sequel finished, I might put a (low) price on that…

Smashwords is a fantastic site: I can’t praise it highly enough. It’s easy to use, the support (if you need it) is rapid and friendly and there are some great free stories on there. The categories for the books make sense and there is a considerable degree of vetting by the site administrators, which adds to the confidence of the site’s users.

Am I still hankering after getting ‘properly’ published? Not really. I’ve got one rejection letter under my belt already and another one probably on the way in a few months’ time. In the meantime, my book has gone past 3,000 downloads on Smashwords and I’m just happy that it is finally out there for other people to enjoy. At least I hope they’re enjoying it: there aren’t any comments or ratings on it yet… 😉

The Roman and the Runaway

The Viking and the Vendetta